Many dog lovers decide to get puppies without realizing how much work they can truly be. A major component to puppy life involves chewing and teething. It can take a full eight months before puppies finish teething and learn that chewing on certain items is not appropriate. From their first teeth to their last, puppies will chew through an assortment of items throughout the home if they are not guided otherwise.

TEETHING PUPPIES: FROM THEIR FIRST TEETH TO THEIR LAST 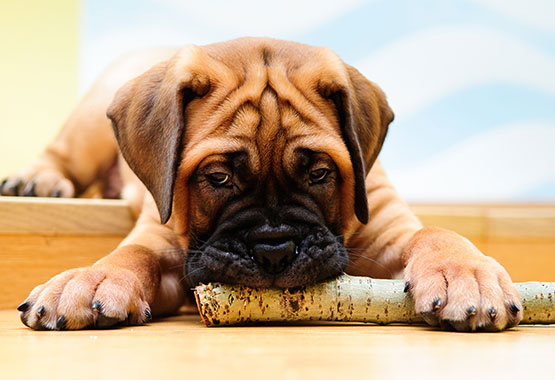 Puppies begins getting teeth once they start weaning from milk. This typically starts around five or six weeks of age, although some dogs do not begin the process until they are eight weeks old. There are  28 ‘milk teeth’ and they’re the doggy equivalent of baby teeth. Teething is painful for puppies.

They often start gnawing at shoes and other items that are low to the ground and easy to find to relieve some of the pressure they feel in their mouths.

Puppies lose their baby teeth faster than it took them to come in. The baby teeth begin falling out approximately one month after coming through.


At only 3 months of age, a puppy loses his first set. The process usually starts with the incisors. 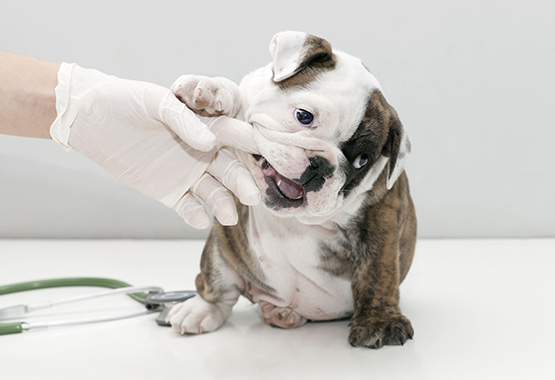 A puppy’s adult molars start to grow in around four months old. Nearly all of the baby teeth will be out at this point.


Puppies should see a veterinarian to determine how many more baby teeth are present.

At six months old, a puppy should have nearly all of their adult teeth in place. Teeth that are growing in crooked or causing the dog to have an overbite may need to be corrected before the teething process is completed.


Correcting the teeth at this stage ensures no long-lasting damage is done. Untreated teeth could make it a difficult for the dog to eat later down the road. 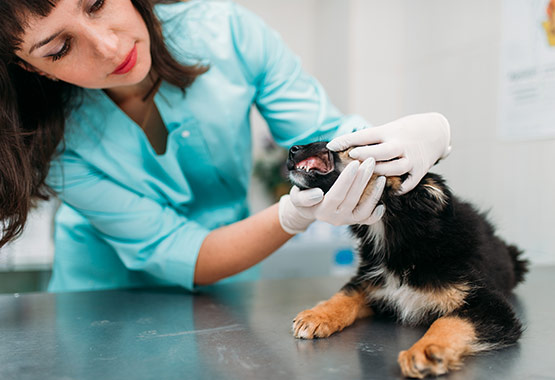 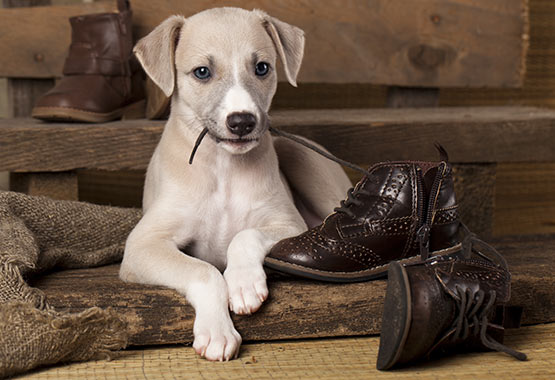 Adult dogs have 42 permanent teeth, and all of the teeth are usually in by the time the pup is eight months old.

The good news is this is usually the point when teething stops. The bad news is that if you haven’t been working with your pup, he or she may continue to chew on things just for the fun of it. You know how much damage a puppy can do to slippers with 28 baby teeth.  Imagine how much damage 42 adult teeth will do to expensive work shoes!


Throughout the teething process, it is important to provide acceptable objects for chewing on. Make sure to use toys specifically created to help with the teething process.  Anti-chew bitter spray to keep puppies away from furniture legs and shoes.

While your puppy’s teeth are coming in, it’s a good time to set him or her up for later success in life by teaching good mouth manners, including bite inhibition and the commands “Leave it!” and “Take it!” Is your pet chewing your stuff? Puppies do tend to bite, but it’s perfectly normal behavior for a puppy. From the time they get their milk teeth and start to play with each other, puppies will nip at their litter mates, roll around with each other, knock each other down, and cuddle – all designed to be part of learning how to socialize with other dogs. 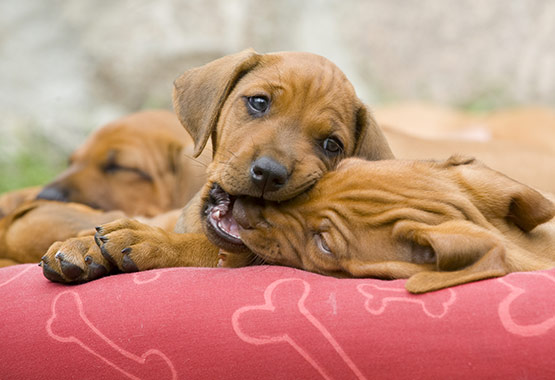 According to Dr. Dunbar, there are two stages in bite inhibition training, with the first stage focused on decreasing the force in the bites, and the second stage focused on decreasing bite frequency. Remember how we talked about biting being part of a puppy’s playtime and it taught him how to socialize? Bite inhibition training basically uses the concept of acceptable socialization between puppies and dogs, and suggests a puppy’s human family use the same techniques!

To be effective, the training must be done in that order; if you try to decrease the frequency first, the dog won't learn to soften his bite. Also, Dr. Dunbar suggests, that puppies “should learn not to hurt people well before he is three months old. Ideally, by the time he is four-and-a-half months old — before he develops strong jaws and adult canine teeth — he should no longer be exerting any pressure when mouthing.” 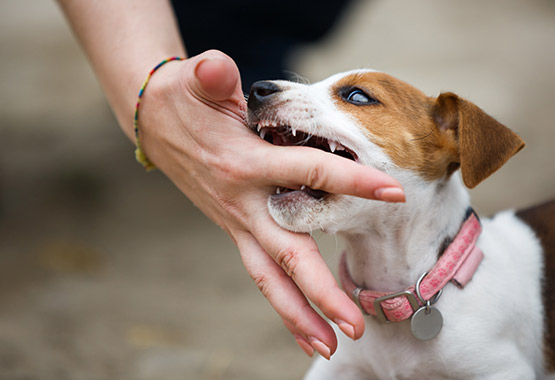 Inhibiting the Force of Bites

The first step is to stop your puppy from hurting people: to teach him to inhibit the force of his play-bites. Physical punishments are certainly not called for. But it is essential to let your puppy know that bites can hurt. A simple "Ouch!" is usually sufficient.


When the puppy backs off, take a short time-out to "lick your wounds," instruct your pup to come, sit, and lie down to apologize and make up and then, resume playing.

The next step is to eliminate bite pressure entirely, even though the "bites" no longer hurt. While your puppy is chewing his human chew toy, wait for a bite that is harder than the rest and respond as if it really hurt, even though it didn't:

"Ouch, you worm! Gently! That really hurt me, you bully!" Your puppy begins to think, "Good Heavens! These humans are soooooo sensitive. I'll have to be really careful when mouthing their delicate skin."

And that's precisely what you want your pup to think: that he needs to be extremely careful and gentle when playing with people.

DECREASING THE FREQUENCY OF MOUTHING

Once your puppy has been taught to mouth gently, it is time to reduce the frequency of mouthing. Your pup must learn that mouthing is okay, but he must stop when requested. Why? Because it is inconvenient to drink a cup of tea or to answer the telephone with fifty pounds of wriggling pup dangling from your wrist. That's why.

It is better to first teach "Off" using food as both a distraction and a reward. The deal is this: once I say "Off," if you don't touch the food treat in my hand for just one second, I'll say, "Take it" and you can have it.


Once your pup has mastered this simple task, up the ante to two or three seconds of non-contact, and then to five, eight, twelve, twenty, and so on. Count out the seconds and praise the dog with each second: "Good dog one, good dog two, good dog three," and so forth. If the pup touches the treat before you are ready to give it, simply start the count from zero again.


Your pup quickly learns that once you say "Off," he can not have the treat until he has not touched it, for, say, eight seconds, so the quickest way to get the treat is not to touch it for the first eight seconds. In addition, regular hand-feeding during this exercise encourages your pup's soft mouth. 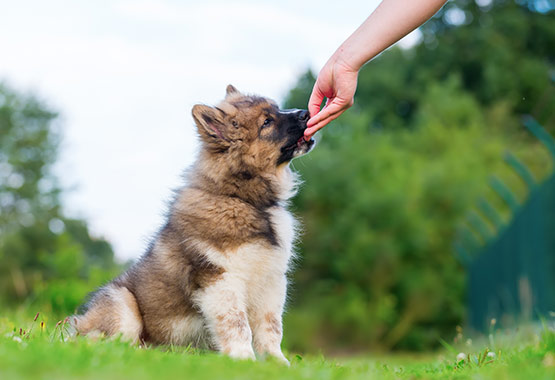 By play-fighting with your pup, which is a normal part of a puppy’s growing up and socializing, he will learn to nibble, instead of bite, and you’ll teach him what is okay to nibble on, and what is not. It is very important to teach these things to your pup at the right age, so he goes from being a “cute little puppy” to a sweet and gentle adult dog. 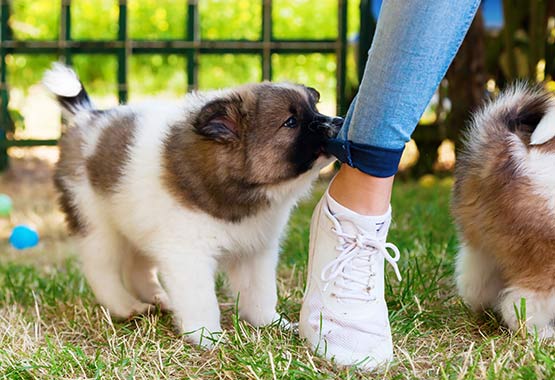 Have you ever had a puppy nip you in your ankle with those little baby teeth? Yeah – having 24 little razor blades biting into your flesh can hurt! But since they’re SO cute when they do it, we don’t do anything to correct their bad behavior.

We might even giggle and tell them how cute they are – totally the wrong message to send.

Some breeds are just naturally more inclined to be chewers. Other dogs become chewers or biters because they weren’t taught proper manners and habits.


But even if your pup is predisposed to be a chewer, there are practices you can instill to keep them from becoming permanent chewers and/or biters.


Do: Avoid removing the puppy from too early from his mamma and litter. Puppies learn what kind of social behavior is through interactions with its litter mates. While many states have laws requiring pups to be at least eight weeks old before they’re sold or given away, they really should stay with their mother until they’re 12 weeks old..


Do: Offer your puppy a chew toy designed specifically for teething pups, or a wash cloth that has been soaked in chicken broth and frozen, if he is biting because of teething. Since teething usually occurs in very young puppies, chew toy and/or washcloth will help teach the puppy acceptable objects to bite. But please make sure you monitor your puppy; don’t leave him alone while he’s playing with his chew toys.


Do: Hand-feed your puppy! No – NOT from the table…but feed his food and treats to him by hand. When children or adults come to visit, as long as they are comfortable with dogs, ask them to feed him food and treats by hand as well. He will begin by nipping or grabbing the food and inadvertently biting your fingers at first, but just be firm, remove the item, say “No!” and then re-offer the item, until he gently takes it from your hand. It won’t always happen or happen immediately, but that’s okay – it’s all part of his training!


Do: Find a baby rattle that makes an awful sound. While playing or feeding your puppy, if he bits, shake the rattle to distract him, and again say “No!” When he walks away, give him verbal praise and a treat as a reward.


Keep in mind that your puppy should never be left unattended. If you must leave for any length of time, put them in their crate while you are away. This prevents your pup from chewing on the furniture and causing havoc when you are not home.


Most of all – enjoy your new puppy! With a proper understanding of the teething process, and provided chew toys, puppy owners will be able to help their puppies through the teething process and keep them from becoming biters or chewers as adult dogs – giving you each years of love and companionship.

Looking for something in particular?

Is your pet chewing your stuff?

< Back to Puppy Blog